Belgium’s Europower, meanwhile, continues to invest in its business. It tells IRN that the success of its new range of generating sets from 60 up to 325 kVA, in open, silenced and rental versions, is prompting the company to add a new building to its facility. 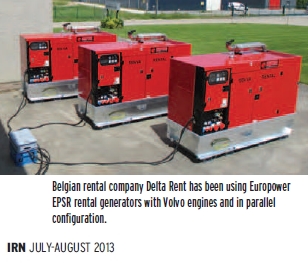 The investment, which will boost the facility to 27000 m2, of which 9000m2 is covered, will allow Europower to increase its stock levels, both in components and finished generators. Construction
of the new building will start in August 2013 and is planned to be ready in the middle of 2014.
The company reports some recent orders with rental companies including Loxam in Belgium, which
is adding trailer mounted 20 and 33 kVA rental specification units, and Delta Rent in the Netherlands.

Delta in parallel
Delta Rent has been using Europower EPSR rental generators with Volvo engines and is now offering parallel operating 85 and 100 kVA sets to their rental customers. The sets are equipped with Deep Sea Electronics control modules.